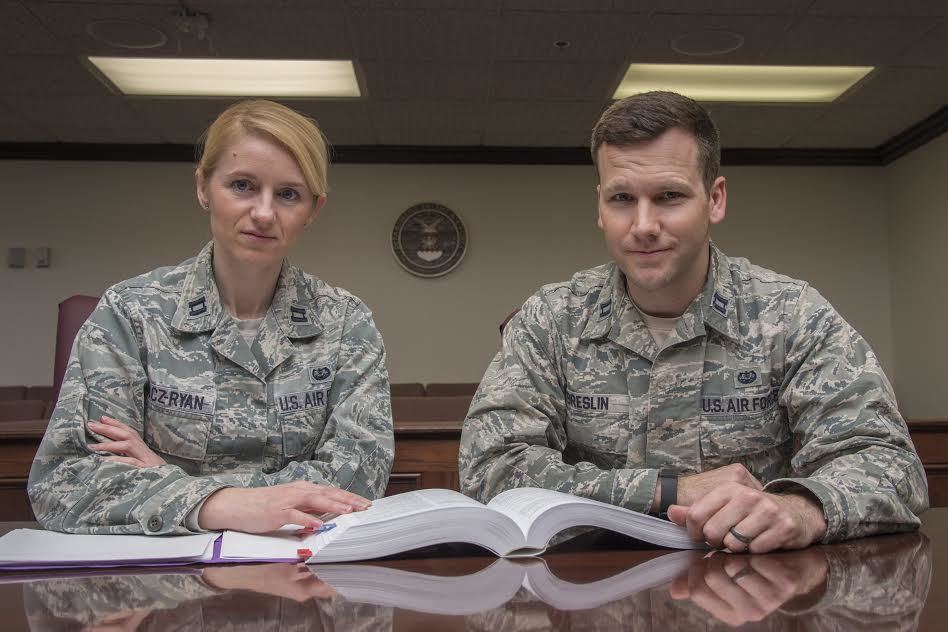 One of the questions I am often asked as a military lawyer is, “What do you do exactly?”

In short, it’s very similar to civilian law practice, but there are also substantial differences, some of which are not well known outside of the military community.

“We enable military justice, which is essentially criminal prosecutions and administrative actions of Air Force military members,” he said. “Civil law is a full-spectrum practice that supports base operations. In addition, we offer legal assistance for military members and their families, civilian employees and military retirees.”

Within the military structure, each base has a host unit. The base legal office supports the commander of that host unit, and assists on legal matters related to the operation of that unit.

At Scott AFB, the host unit is the 375th Air Mobility Wing. In addition, our legal office supports 30 other units, including the headquarters for Eighteenth Air Force, Air Mobility Command, U.S. Transportation Command, and the Army’s Surface Deployment and Distribution Center. In all, the legal office supports a total population of 13,000 employees and their family members and about 20,000 retirees.

Military members remain subject to federal and state criminal laws, however they are also subject to an additional set of criminal laws, called the Uniform Code of Military Justice, or UCMJ. It defines some crimes common across all jurisdictions, such as murder, rape, and theft. But it also contains many provisions that are unique to the military, such as desertion, fraternization between enlisted members and officers, and disrespect to a superior commissioned officer.

The legal office contains its own federal courtroom where courts-martial and administrative hearings are conducted by members of the Air Force Judiciary.

The base also has specialty legal positions such as the Area Defense Counsel, who represent Air Force members accused of criminal acts and a Special Victims Counsel who represent victims of sexual assault. The Air Force only picks the best and brightest for these positions and both report through a separate chain of command outside of the legal office and host wing commander to ensure no conflicts with client representation.

According to regional environmental impact studies, Scott AFB is the largest employer in Metro-East, and sixth largest in the region. As a result, the Scott legal office advises on a variety of regulatory and compliance matters.

Capt. Deepa Patel, the Chief of Civil Law, explained, “We offer full service legal support that address civilian personnel and labor law to federal environmental standards, ethics questions for senior Air Force leaders, to government contracts and procurements. If there’s an area of the law that exists, chances are we handle it; it is an extremely diverse practice.”

The legal office also advises commanders at all levels to ensure their decisions are in compliance with all applicable laws and regulations.

The Scott legal office also provides assistance to military members, their families, and retirees with 20 years or more of service. Judge advocates draft wills and powers of attorney, and provide advice on domestic relations, landlord-tenant issues, consumer protection, immigration, and any other legal matters in which service members may need help.

Last year, the Scott legal office provided almost 800 documents to more than 3,000 individual clients. However, judge advocates do not appear in civilian courts to provide clients with legal assistance. Cases requiring a court appearance are referred to local practitioners.

“The goal of our legal assistance program is to help service members address issues on the home front so they are able to remain mission-focused,” says 1st Lt. Natalia Escobar, Chief of Legal Assistance. “You never know what sort of legal issue you might be dealing with. It’s always an interesting practice.”

An Opportunity to Serve

Air Force JAGs bring a wealth of experience to this diverse practice of law. They come into the JAG Corps with a desire to serve their country, and harness their education into a position that allows them to give back. They are leaders, innovators and experts in their fields. In essence, they embody the core values of the Air Force, which are Integrity, Service, and Excellence in All We Do.

Want to get notified whenever we write about Air Mobility Command ?

Sign-up Next time we write about Air Mobility Command, we'll email you a link to the story. You may edit your settings or unsubscribe at any time.