Judge Stiehl remembered as the 'epitome' of a federal judge 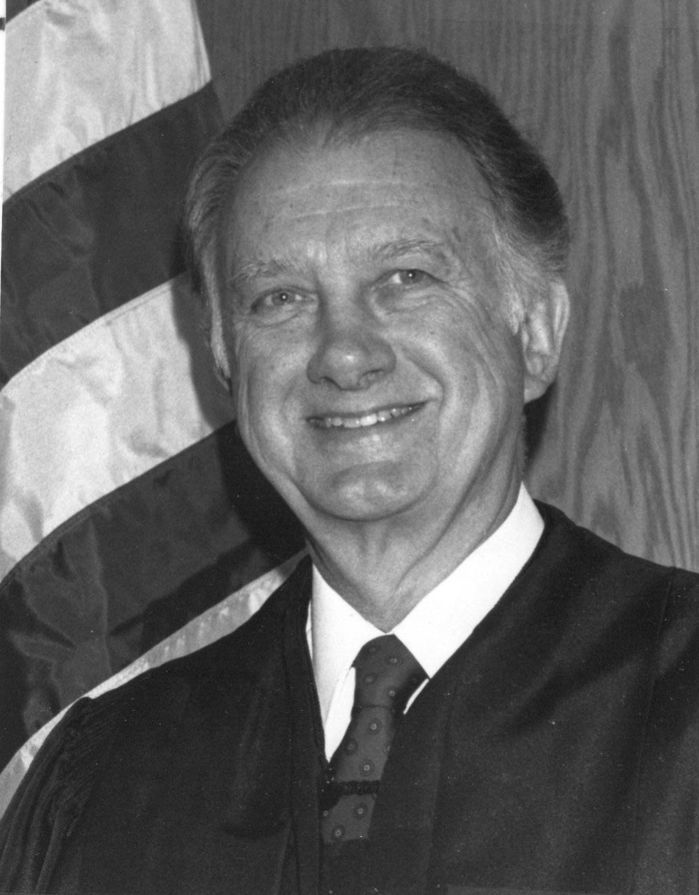 Former employees, colleagues and family remember retired federal judge William D. Stiehl, Sr., as an ethical judge who strived to make the community a better place through his fair sentencing practices and service to the country.

Stiehl, 90, died on Feb. 8 following a brief illness. He was nominated to the bench by President Ronald Reagan in the U.S. District Court for the Southern District of Illinois in 1986 at the age of 60, upon the recommendation of U.S. Sen. Charles Percy.

“Judge Stiehl was a consummate judge and public servant who treated all who came before him with dignity, respect and compassion,” stated current chief judge Michael J. Reagan.

“Judge Stiehl has been a superb leader through good times and challenging ones, and he has brought knowledge, skill and diplomacy to the complicated work of a challenging docket. The Judiciary has benefitted uniquely in both substantive results and enhanced reputation as a result of his careful, honest and studied decisions,” he added. “And beyond all of that, I will miss even more the camaraderie we have had.”

Reagan began working with Stiehl when he took the bench in 2000, but he said he first met Stiehl in 1986 in the first civil case Stiehl tried as a federal judge.

But beyond his legacy as a judge, Stiehl’s family remembers him for his compassion and love.

“When I think of him, he was always very calm. I don’t know that I ever saw him flustered or upset or out of control. But he was also very sentimental,” said Stiehl’s son, William Stiehl Jr. “He loved his family. He always tried to do the right thing."

Former employees Sandy Panier and Julie Fix Meyer had nothing but praise for Stiehl’s time on the bench, saying he was one of the most ethical and caring judges they’ve ever known.

“He was the epitome of a federal judge,” Meyer said. “He was reserved. He was a gentleman.”

“Judge Stiehl was just the perfect example of what a federal judge should be like,” Panier added. “He was the most honest, fair and sincere human being I’ve ever known.”

Meyer explained that Stiehl took his responsibilities as a judge very seriously and never made a decision without first making sure he had all of the information.

“He really was just a great, charming man. But more importantly, he was a wonderful, ethical man who did his job to the best of his ability,” Meyer said.

Meyer and Stiehl Jr. said sentencing was always a difficult duty for him, but he approached the task with responsibility.

But Stiehl was known for handing down fair judgments and sentences while taking every detail into consideration.

Perhaps he was best known for a 1991 sentencing, involving the bonding company Matthews & Wright, which allegedly issued fraudulent bonds and scammed the City of East St. Louis.

In most cases involving fraudulent bonds, the defendant is fined and the money goes to the U.S. Treasury. Stiehl didn’t think that was fair to the people who were actually wronged by the defendant, so in addition to the usual fine, Stiehl also set up a community service penalty as part of the sentencing.

Stiehl required the company to put approximately $6 million into a community fund to benefit the citizens of East St. Louis. He set up a board and he kept jurisdiction over the fund and its expenditures. Meyer acts as the current president of the board.

“It’s a really great program and is dedicated to the youth. It’s very unique. This kind of thing didn’t really exist at the time he set this up,” Meyer said.

In typically Stiehl fashion, Meyer said he did as much research as he could and sought guidance from outside sources before setting up the program.

The community fund has been used for scholarships, trash cleanup and opening public pools, among other projects. In fact, there hadn’t been a trash pick-up service in East St. Louis in over seven years when it was reinstituted by Stiehl.

Eventually, the community fund was expanded to include neighboring communities and was used to purchase a fire truck.

“It’s just been a great organization and a great legacy for who he was,” Meyer said.

Twenty-five years later and the community fund is still going strong thanks to grants, Meyer said.

“He was an outstanding role model,” Stiehl Jr. said. “He always felt that a person ought to not only take care of their family but also contribute to society.”

Because of his fairness in court, Meyer said Stiehl was admired by both sides of the bench.

“Win or lose, you always know why you lost with Judge Stiehl. It wasn’t a mystery,” she explained.

“One time an attorney said, ‘A judge’s job is to call balls and strikes, not to run the bases.’ And that was Judge Stiehl. He didn’t try to run the case for you,” she added.

And Stiehl loved his job.

“He taught me what it means to enjoy and love what you are doing,” Meyer said.

He maxed out on his pension when he reached senior judge status. He could have easily retired then, but he instead chose to continue working, essentially for free. Even up until his last days on the bench at 88 years old, he would work full days with a full caseload.

“He was a member of the ‘Greatest Generation,’ which is earmarked by serve above self. So it is no surprise that he served our country in the United States Navy. And upon taking senior judge status in 1996, he continued to work for the next 17 years, with an almost full caseload through the end of 2013, while receiving no salary,” Reagan stated.

Stiehl also saw his share of comical cases in federal court, Meyer explained. And most of those bizarre cases involved “hapless bank robbers.”

“They were not our brightest defendants,” she joked.

She said one defendant attempted to rob a bank over a three-day holiday weekend and got stuck in the ceiling with his legs dangling outside. He dangled there for the entire weekend until employees began showing up for work on the following Tuesday. His defense was that he shouldn’t be punished because he wasn’t able to actually rob the bank.

She said Stiehl used to tell these defendants to get a new line of work because they weren’t very good at robbing banks.

“He had a really wonderful, quiet sense of humor that would sneak up on you,” Meyer said.

Meyer said Stiehl was loved and revered “by the whole court family,” especially by those who worked for him.

She said it was clear how much he loved his staff and how much his staff loved working for Stiehl by how long they stayed.

Meyer also said Stiehl’s family was “extraordinarily important” to him.

He would have been married to his wife Celeste Stiehl for 69 years this June. Stiehl had a son, William D. Stiehl Jr., and a daughter, Susan M. Guthrie. He also had four grandchildren, Kathryn Frauenfelder, Christina Stiehl, William Guthrie and Andrew Guthrie, and a great-granddaughter, Gretchen Frauenfelder.

“He delighted in his children and grandchildren,” Meyer said.

Stiehl also loved his dogs, who he considered to be part of the family.

Stiehl Jr. joked that someone could criticize him or his sister, but they better not make fun of the family dog Ziggy.

Stiehl also served as a lieutenant in the U.S. Navy during World War II, where he served on a supply ship in the pacific.

In fact, Stiehl Jr. said Johnny Carson, whom they called Kit, was his father’s roommate for a period of time.

After the war, Stiehl left active duty and was in the reserves while he earned his law degree from St. Louis University School of Law. He was later called back into active duty to serve in the Korean War.

Stiehl Jr. shared a story that his mother told him about a time when Stiehl was tasked with writing an interpretation of a regulation for his fellow staff members in the Navy. After completing the assignment, his captain told him that he was wrong. The two went back and forth, but Stiehl stood his ground. The admiral was in the room while this was going on and eventually stepped in to declare that Stiehl’s interpretation was correct.

Because he was not afraid to back down when he believed he was correct, Stiehl was chosen to be on Admiral C. Turner Joy’s staff during the Korean Armistice negotiations.

Following his time in Korea, Stiehl was in the reserves until about 1973.

During that time, he worked in private practice in Belleville from 1952 until 1986, including a stint as an assistant state’s attorney. He was a special assistant Illinois attorney general from 1970 until 1973.

Stiehl was an avid reader. Both Meyer and Stiehl Jr. said he was always reading something and recommending books to anyone who showed interest. He especially loved history books and biographies.

Stiehl Jr. said his father also loved to travel. Stiehl and his wife went everywhere they wanted to see, including Africa, Asia and Eastern and Western Europe.

Want to get notified whenever we write about City of East Saint Louis ?

Sign-up Next time we write about City of East Saint Louis, we'll email you a link to the story. You may edit your settings or unsubscribe at any time.