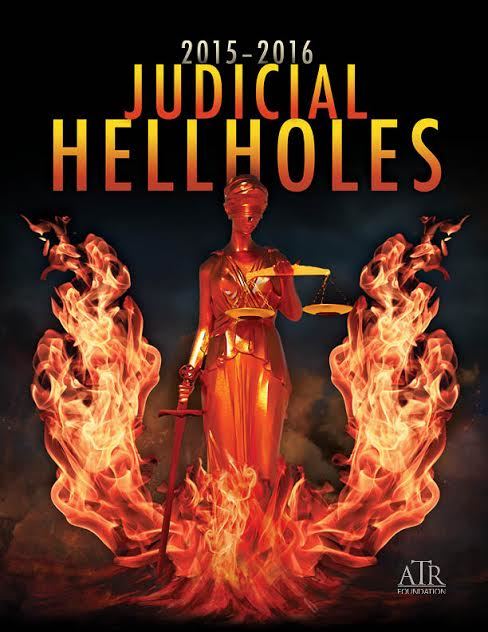 Madison County was once again named to the American Tort Reform Association’s “Top Five Judicial Hellholes” in the country - thanks in large part to what the group calls an asbestos “rocket docket.”

ATRA’s annual “Judicial Hellholes” report was released today, with Madison County ranked as the fifth worst such jurisdiction in the country.

The civil justice reform group defines a judicial hellhole as “a place where judges systematically apply laws and court procedures in an unfair and unbalanced manner.”

Courts in California topped the list with the New York City asbestos litigation court (NYCAL), Florida, Missouri and Madison County trailing behind in what ATRA perceives as the top five most unfair courts in the country in how civil litigation is handled. It’s worth noting that three of the top five judicial hellholes are entire states, while Madison County and New York earned it’s spot on the list based entirely on one jurisdiction.

“With both this annual report and a year-round website, our Judicial Hellholes program since 2002 has been documenting troubling developments in jurisdictions where civil court judges systematically apply laws and court procedures in an unfair and unbalanced manner, generally to the disadvantage of defendants,” stated Tiger Joyce, ATRA president.

“For far too long, Madison County has been a magnet for personal injury lawyers and plaintiffs from all over the country who clog our courts with junk lawsuits that have nothing to do with Madison County, all in the hopes of striking it rich playing our region’s plaintiff-friendly lawsuit lottery," Akin stated.

"Greedy personal injury lawyers have turned the ‘Land of the Lincoln’ into the ‘Land of Lawsuits,’ and that is hurting job creation efforts in the Metro-East and throughout Illinois."

The Illinois Trial Lawyers Association (ITLA) discredited the report. The group called the report an “unwelcome, holiday-time tradition of stoking prejudice and fear about our civil justice system.”

“ATRA works to undermine the independence of our courts to help corporate interest avoid responsibility for their dangerous behavior and reckless actions," ITLA reacted in a statement.

“The real ‘judicial hellhole’ that ATRA is trying to create – and that we must demand our elected officials vigorously oppose – is a court system in which regular men and women have little chance for justice because their rights have been stripped away by politicians doing the bidding of corporate special interests."

Much of the report's criticism focused on the high volume of asbestos cases filed in Madison County, amounting to roughly a third of all asbestos lawsuits in the nation despite its recent drop in case filings.

The vast majority of cases filed in Madison County, the nation’s busiest asbestos docket, have no connection to Illinois. In fact, roughly 10 percent of the asbestos cases are filed by an Illinois resident and only about 1 percent are filed by Madison County residents.

“It’s just common sense to require lawsuits filed in Illinois to have an actual connection to Illinois, and yet in Madison County, 98 percent of the asbestos lawsuits filed there are for plaintiffs who do not live in that county,” Akin said. “That is an absurd misuse of our courts and our tax dollars, and it victimizes all of us.

“We need to create jobs in Illinois, not more lawsuits, which is why I-LAW applauds Governor Rauner for taking the lead to week out junk lawsuits here and restore fairness to our courts. Governor Rauner’s reasonable, common sense lawsuit reforms will create jobs and unclog our courts, which will speed the legal process for those with legitimate claims."

Akin also recommended citizens contact their legislators to ask if they will "stand with the personal injury lawyers, who are the only ones who profit from this unfair system, or the small businesses and individual citizens who are far too frequently targets of unfair frivolous lawsuits and are made to pay for personal injury lawyer greed."

ITLA, on the other hand, argues that the number of asbestos lawsuits has declined by 22 percent since 2013 – when Madison County saw a record-breaking year of 1,678 asbestos cases filed.

“The misinformation spread by ATRA’s feeble ‘report’ is part of a broader and very well financed nationwide campaign to prevent injured or sickened individuals from getting a fair shake in our courts," ITLA's statement reads. "Powerful and wealthy special interests that fear they will be held accountable for their wrongdoing want to severely limit the opportunities for judges and juries to decide cases. Throwing around the disparaging term ‘judicial hellhole’ is meant to further prejudice the public and prospective jurors against plaintiffs who have suffered horrible injuries and terrible mistreatment."

ATRA's Hellhole report also takes issue with the hundreds of asbestos cases set for trial in a single asbestos docket, which pressures defense attorneys into settlements because they are unable to properly prepare for every case.

“Like a crack NFL offense sending too many receivers for defenders to cover into a particular part of the field, plaintiffs’ lawyers’ employ a comparable ‘flooding the zone’ technique with their asbestos cases in Madison County,” the report states.

Associate Judge Stephen Stobbs, who presides over the Madison County asbestos docket, has been praised in the past by defense attorneys for making efforts to clean up the docket by implementing a priority system, which requires plaintiffs’ attorneys to select their top five cases most likely to go to trial each week. This allows defendants to focus on five possible trial cases rather than 20 or more.

However, in recent weeks, hundreds of asbestos cases have been set for trial on the same day.

“Of course, being the nation’s epicenter for asbestos litigation is but a symptom of Madison County’s more serious disease – a culture of bias wherein local judges and plaintiffs’ lawyers seem to agree that it’s perfectly okay to stack the deck against and fleece out-of-state defendants, even if that may sometimes require willful end runs around judicial election law and the will of voters,” the report states.

Madison County also is criticized for its judicial appointments and elections as asbestos lawyers continue to financially support their favorite candidates with campaign contributions.

Madison County also is criticized for the resurrection of the infamous Price v. Phillip Morris tobacco case, a $10.1 billion judgment entered by a judge, not jury, in 2003. In spite of being overturned at the state supreme court in 2005, lower courts have allowed proceedings to go forward with new arguments.

“With a vampire’s determination to avoid the light, plaintiffs’ counsel has tried repeatedly for more than a decade to revive a monstrous initial judgment of $10.1 billion, leading to a uniquely disturbing procedural history,” the report states.

The class action was filed in Madison County in 2001 seeking damages on behalf of all Illinois residents who had purchased “light” cigarettes since 1971. Former Judge Nicholas Byron presided over a three-month bench trial, delivering the $10.1 billion award.

“So while the plaintiffs’ attorneys driving this case may or may not see their reflections in a mirror, they’ll most certainly be seen back before the state high court, trying to convince the justices that, even though they lost fair and square under existing law long ago, they should now be granted a win and allowed to take a nearly $2 billion contingency-fee bite out of the original other-worldly damages award,” the suit states.

While St. Clair County was left off the Judicial Hellholes list this year, it was not forgotten completely.

The report briefly highlighted the move made by Judges John Baricevic, Robert Haida and Robert LeChien to seek election rather than retention in an effort to avoid the 60 percent threshold required to maintain their seats at election time.

“These judges, who have received numerous campaign contributions from personal injury lawyers, are now following the lead of their friends in the plaintiffs’ bar who repeatedly game the system in the Metro-East to make sure they win and cash in,” Akin said in his statement. “These judges want to change the rules mid-game for their own personal benefit.

Missouri was also listed as one of the top Judicial Hellholes, ranking fourth in the nation. Called the “Show Me Your Lawsuits State,” Missouri has earned a reputation for having a judicial nomination process that has become hijacked by the plaintiffs’ bar, a state court that issues outlier decisions and strikes down civil justice reforms and a standard for admission of expert testimony that allows “junk science” into courts, according to ATRA.

Missouri is one of the last states to adopt the Daubert standard for admission of expert witness testimony, which the plaintiffs’ lawyers “strongly oppose.” Daubert, which imposes higher standards for evidence, is used in more than 30 other states. Instead, Missouri uses a “flexible” standard for admitting scientific or technical testimony based on an expert’s paper credentials instead of his or her methods, resulting in what ATRA calls “junk science.”

The Hellhole report states that Missouri circuit court judges also oppose Daubert legislation because their appointments to the bench were influenced by the plaintiffs’ bar. This “Missouri Plan” was “captured by plaintiffs’ lawyers with predictable results,” ATRA states.

The City of St. Louis also is becoming a noticeable hotspot for asbestos litigation with the potential for “excessive” damage awards, the report states.

In one case described in the report, a St. Louis jury awarded a plaintiff $1.5 million in compensatory damages, even after attorneys stated that the claim was only worth $822,250, and another $10 million in punitive damages. The defendant currently seeks to reduce the award.

“In addition to generous, plaintiff-friendly verdicts, St. Louis also has at least one judge willing to ignore U.S. Supreme Court precedent requiring a defendant to have a business presence in a given state in order to be subject to lawsuits there,” the report states.

As forum arguments become an increasing focus in Madison County, it appears the same can be said of St. Louis. Circuit Court Judge David Dowd filed an order in August refusing to dismiss a case in which the defendant did not maintain its headquarters or a principal place of business in Missouri and the plaintiff was not exposed to the defendant’s products within the state.

Dowd found that the defendant “consented” to jurisdiction in St. Louis by complying with state law requiring it to designate a registered agent in Missouri. The defendant’s appeals were rejected by the Missouri Court of Appeals and the Missouri Supreme Court.

“So with asbestos dockets as clogged as they are in Southwestern Illinois, might plaintiff-favoring judges in Missouri invite a growing migration of asbestos cases across the river to St. Louis? Some observers say that migration is already underway,” the report states.