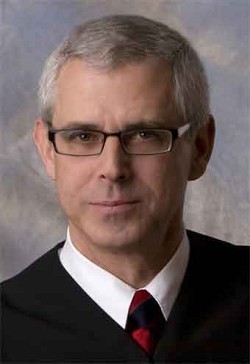 HILLSBORO – Lawyer Tom Keefe of Swansea accused lawyer Bill Knapp of Edwardsville of tipping the Record about a deposition of client Sarah Deatherage, in a message he sent to Knapp and 25 other lawyers.

Keefe also accused two other lawyers of leaking to the Record, in a brief for a Dec. 14 hearing in Montgomery County circuit court.

Circuit Judge Douglas Jarman would have heard that dispute and many more on that date, but the hearing didn’t happen.

Shortly after 10 a.m. that day, Jarman told the only lawyer in the room that the parties resolved all issues and canceled the hearing.

Keefe filed a wrongful death suit for Deatherage in 2013, in Madison County.

She sought damages from parent company DOT Foods, of Mount Sterling, and from driver Johnny Felton of Georgia.

Her claims included grief and mental suffering, a category of damages that state legislators created in 2007.

She and Keefe then stepped to center stage in a campaign against retention of Illinois Supreme Court Justice Lloyd Karmeier.

At a press conference in October 2014, Keefe expressed suspicion that Karmeier manipulated Fifth District judges for the benefit of DOT Foods.

Keefe then paid for robo calls that Deatherage recorded against Karmeier.

Defense lawyers deposed her in July, and one asked about dating and social life.

Keefe directed Deatherage not to answer.

Defendants moved to compel an answer, arguing that the question related to her claim for grief and mental suffering.

On Sept. 17, Jarman ruled that she must answer.

On Oct. 1, Keefe moved for reconsideration.

“Such a ruling would compound plaintiff’s damages, and have a chilling effect on surviving spouses’ willingness to bring the wrongful death of a spouse to trial and to seek the full value of their wrongful death claims,” Keefe wrote.

“Evidence of new romantic relationships are irrelevant, even to consortium damages, unless and until the surviving spouse is actually remarried,” he wrote.

Keefe wrote that the question “veers to the prurient and promises to needlessly embarrass and upset.”

He wrote that liability “should not be reduced by the fact that Sarah Deatherage may now be trying to enjoy the benefit of a new relationship.”

On Oct. 7, he moved for sanctions against DOT Foods counsel Dan Devitt of Chicago and DOT Transportation counsel Don Tracy of Springfield, a member of the family that owns DOT Foods.

Keefe claimed they stopped a deposition of a company manager, took him out for 20 minutes, and brought him back to change his story.

He sent a copy of the motion to the Illinois Attorney Registration and Disciplinary Commission.

On Oct. 28, Devitt and Tracy moved for a protective order.

“Throughout the course of this litigation, and particularly since its transfer to Montgomery County, plaintiff’s counsel has engaged in intimidating, uncivil and disrespectful behavior,” Devitt and Tracy wrote.

The lawyers wrote that the motion for sanctions compelled them to disclose transcripts and emails that demonstrate an effort to intimidate defendants and their lawyers.

In their motion for protective order, Devitt and Tracy identified Devitt as gay, and wrote that on multiple occasions Keefe accused him of having his panties twisted.

Devitt and Tracy attached a May 5 email from Keefe to three defense lawyers, calling one of Jarman’s orders very slick and shameless.

They attached a June 2 exchange that started with Devitt telling Keefe he seemed intent on proving himself uncivil and unprofessional.

Keefe replied, “I could give you more facts to prove my lack of civility and professionalism if you like. I always thought those things were over rated.”

Devitt and Tracy also attached to their motion email that Keefe sent to many lawyers on Oct. 1, with Knapp as first recipient.

Keefe wrote, “Isn’t Bill Knapp a nice man and who would have thought the Record had extended its reach to Montgomery County without a tip?”

He also sent it to:

- Bruce R. Cook, Joe Bartholomew, and Greg Shevlin, all of the Cook firm in Belleville.

- John Simmons and Perry Browder of the Simmons firm in Alton.

- Himself and Samantha Unsell at his firm in Swansea.

- Roy Dripps and Charles Armbruster at their firm in Wood River.

Devitt and Tracy pleaded in their motion that Keefe intends to persuade the lawyers that Knapp violated rules of professional conduct.

In support of sanctions, he wrote, “These parties stand accused of serious discovery misconduct and the lawyer’s violations of the canons of ethics and they respond by attacking plaintiff’s counsel.”

He wrote that they “can attack plaintiff’s counsel in this response, in the motion for protective orders, in their press leaks, and it won’t change the fact that a driver they couldn’t bother to discipline years earlier killed a husband and father, pled guilty to a felony, (played the race card - see attached press release from DOT Foods), and these defendants made campaign contributions to a judicial retention race for the first time in the company’s history!”

In opposition to a protective order, he wrote, “They complain a small town lawyer from a four person firm and his widowed mother client are intimidating a multi billion dollar family owned corporation and one of its lawyer owners.”

He wrote that they want to deprive Deatherage and him of free speech.

“If I were a huge family corporation whose lawyer owner was woodshedding a witness during a break, whispering to witnesses during cross examination, and leaking favorable stories to a newspaper owned by the United States Chamber of Commerce, I would want to gag anyone who thought, or spoke, ill of me or my company,” Keefe wrote.

The Madison-St. Clair Record is owned by the U.S. Chamber Institute for Legal Reform.

“It is unclear whether I would resort to the race card or the gay card, but they have," Keefe wrote.

“Mr. Devitt’s sexual orientation, contrary to his rather inflamed view of himself, is not a matter of common knowledge in Southern Illinois.”

Keefe found it extraordinary that the Record covered the case.

He wrote that a search of Record archives showed it is the first time the paper has covered a case in Montgomery County.