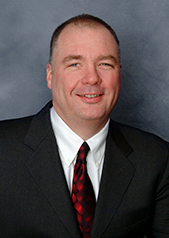 In a deposition for her wrongful death suit against Dot Foods, Deatherage said she volunteered for a press conference against Karmeier’s retention last year.

“I asked what I could do to inform the public that there was someone crooked running for office,” she said.

“I asked who I can talk to about this, and it was arranged."

According to a transcript of the deposition, attorney Don Devitt of Chicago, representing defendant Dot Foods, said, “Who did you ask?”

Devitt asked what happened next.

“Then I was given the resources I asked for,” she said.

At a press conference set one week before the general election, her lawyer, Tom Keefe of Swansea, criticized transfer of the case from Madison County to Montgomery County.

In his remarks made at the press conference, Keefe expressed suspicion that Karmeier arranged the transfer because Dot Foods had contributed to his campaign.

At her deposition, Deatherage said that Keefe paid for a robo call that she recorded against Karmeier.

Devitt: “How is it that anything that Justice Karmeier did made it harder for you to get justice for you and your children?”

Deatherage: “He had a hand in the panel that was deciding the venue of my case.”

Devitt: “Do you think that the venue in Montgomery County isn’t going to provide you the same justice that you would get in Madison County?”

Certification preserves a deposition dispute for possible review by a judge.

Devitt then read from a script of her robo call that said, “Judge Karmeier is funded by the company that killed my husband.”

He asked her what the company did that resulted in her husband’s death.

Deatherage: “They killed my husband.”

Devitt asked how, and she said, “They hired a reckless driver who ran him over.”

Devitt: “Was what happened an accident?”

Keefe objected and said, “I’m going to certify that one too.”

Prior to the deposition of Deatherage on June 29, Keefe dodged interrogatories about the retention campaign. He explained the press conference by claiming it as his own.

Keefe wrote, “Plaintiff’s counsel conducted a press conference concerning what he perceived to have been violations of the Canon of Ethics as it relates to avoiding the appearance of impropriety by Justice Karmeier in accepting campaign contributions from defendant Dot.”

He wrote that Deatherage taped a robo call but doesn’t know where it was played.

“Plaintiff’s best recollection is that the robo call advocated a no vote on Justice Karmeier’s retention,” he wrote.

Kyle Deatherage died in 2012, when a truck hit him at the side of Interstate 55 in Montgomery County.

He had stopped a driver for a possible violation.

He ruled that he could exercise jurisdiction because Dot Foods does business in Madison County.

Keefe then held the press conference one week before the election on Oct. 28, and the robo calls followed.

Despite his efforts, Fifth District voters retained Karmeier in November.

Now Deatherage and Keefe face questions about the efforts in a court they wanted to avoid.

At Deatherage’s deposition, Devitt asked when she heard of Karmeier.

Devitt asked when she next heard about him.

Deatherage: “I’m not going to answer that.”

Deatherage: “He had a hand in the panel selected to hear the attorney speak about where the case venue would be.”

Devitt asked what that meant.

Devitt asked if Karmeier participated in the decision.

Deatherage: “He indirectly did.”

Devitt: “How did he indirectly do that?”

He asked why she was asked to participate in the campaign.

Deatherage: “I actually offered because I was angry and I wanted to inform citizens of what was happening behind the scenes that nobody saw.”

He asked what was happening that nobody saw.

Deatherage: “He was accepting money from Dot Foods.”

Deatherage: “To arrange the panel in their favor.”

She said she saw a piece of paper with amounts of contributions highlighted.

Devitt asked where she got it.

Deatherage: “I don’t have to tell you that.”

Devitt asked if she had any input in drafting the script for the robo call.

Deatherage: “I knew what I wanted to say, and I said it.”

He asked who wrote it.

She said she didn’t know.

Devitt quoted the third sentence: “I’m calling thanks to the generosity of our family’s friend, Tom Keefe.”

Devitt asked why it was underlined.

Devitt: “Because he paid to have it done.”

He asked what district Karmeier ran in.

Deatherage: “I believe the Sixth.”

He asked if it covered Montgomery County.

She said she didn’t know.

He asked if any calls went to Montgomery County. She said she didn’t know.

Devitt said he was finished.

Attorney Al Pranaitis of Alton, representing Dot Transportation, said, “At the end of the robo call you gave a telephone number and invited the person who was receiving that call to call the number if they wanted to.”

Pranaitis: “Is this the number that was at the end of the call?”

Keefe: “Where does it say that she invited the person to call that number?”

Pranaitis: “It doesn’t, but I think she did.”

Pranaitis to Deatherage: “At the end of the robo call, did you give a number and say that the person could call that number if they wanted to?”