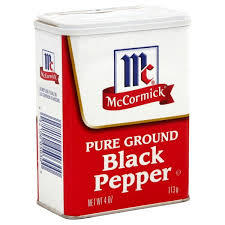 Spice maker McCormick & Co. reduced the amount of pepper in tin containers by a fourth without reducing the size of the tins, according to a class action complaint in federal court.

Sean Cronin of the Donovan Rose Nester firm in Belleville sued McCormick for Scott Bittle on Sept. 4, accusing it of “unlawful slack filling.”

“When plaintiff purchased the reduced product in the summer of 2015, he thought it contained the same amount of pepper as had been in the full products because the tin was the same size it had been in the past,” Cronin wrote.

The complaint states that Bittle would not have purchased the product had he known that it contained 25 percent less pepper than products he purchased previously.

Cronin wrote that the change occurred early this year and consumers couldn’t see it because the tins are opaque.

“McCormick intentionally maintained the price of its standard sized tins, notwithstanding the significant reduction in the amount of ground black pepper contained in the traditional tin, which had the effect of further adding to the perception that nothing had changed,” Cronin wrote.

“Although the tins note in small print the actual weight of ground black pepper contained in the slack filled tins, consumers are not otherwise told of the decrease in ground black pepper from the traditional fill or that the tin contains a significant void.

“Consumers rely upon the traditional size of the tins as a basis of making a purchasing decision and believe the tins are effectively full, as they have been for decades.

“Under both federal and Illinois law, McCormick lacks any lawful justification for reducing the amount of pepper leaving empty space in the reduced products.”

Cronin asked for an injunction against slack filling and an order requiring McCormick to disgorge wrongful profits and make restitution.

He asked for an order compelling McCormick to produce corrective advertising. He also asked for punitive damages and attorney’s fees.

The suit may not stay long at district court, for McCormick has asked the U.S. Judicial Panel on Multi District Litigation to consolidate a group of similar suits.

The first suit came from competitor Watkins Inc., which alleged business injury at district court in Minnesota, home of its headquarters.

Consumers then filed class action complaints in three districts of California and the eastern district of New York.

McCormick moved for consolidation on Aug. 10, asking the multi district panel to centralize all five actions at district court in Maryland, home of its headquarters.

David Bamberger of Washington wrote that all five actions alleged similar conduct in a limited and identical time period.

“Given the similarity of issues, there is no need for at least five separate federal courts to engage in substantially similar pretrial proceedings,” he wrote.

“Centralization will also conserve McCormick’s resources and allow it to properly focus on its defense during the pretrial process in one forum.”

On Aug. 31, Watkins opposed consolidation but pleaded that if the panel judges grant it, they should centralize the actions in Minnesota.

The other plaintiffs opposed consolidation but pleaded that if the panel judges grant it, they should centralize the actions in California’s southern district.

Want to get notified whenever we write about Donovan, Rose, Nester, & Joley, P.C. ?

Sign-up Next time we write about Donovan, Rose, Nester, & Joley, P.C., we'll email you a link to the story. You may edit your settings or unsubscribe at any time.