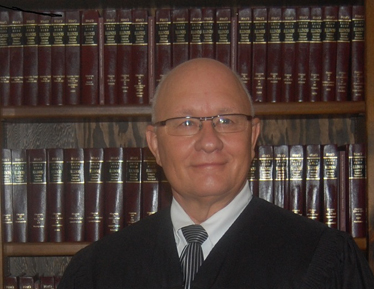 They reversed his conviction on July 17, finding flaws throughout his trial at Jackson County courthouse in Murphysboro.

“There are a number of problems with the state’s arguments, and we are far from convinced that the evidence against the defendant was overwhelming,” Justice James Moore wrote.

State’s attorney Michael Carr charged him with felony retail theft in 2011, alleging he took two coats from Macy’s in Carbondale.

At trial in 2012, circuit judge William Schwartz rushed through voir dire without asking jurors if they accepted the principles he recited.

He didn’t ask if they understood the meaning of reasonable doubt.

In opening argument, assistant state’s attorney Rebecca Blomer said jurors would watch Mueller pick up merchandise and exit the doors without paying for the coats.

She said police officer Tim Lomax would testify that he watched video surveillance and recognized Mueller as the man taking the coats.

Jurors watched a video disk she had made from a hard drive, lasting 38 seconds.

Officer Lomax testified that what was on the disk fairly and accurately depicted what he watched on the video surveillance that day.

Blomer asked him if he saw an individual he could identify. He said he did.

“When you watched the footage on this video, did you identify the same individual?” she asked.

She asked Lomax who he identified when he viewed the video footage.

She said, “The video footage that we are dealing with is the one being admitted into evidence. Any other video footage he is testifying to would be hearsay.”

Blomer didn’t ask Lomax how he identified Mueller as a suspect or how and when police arrested him.

In closing argument, Hanlin said Womick was no longer in loss prevention.

She said Womick testified that she was very close behind the suspect, but the video showed her so far behind that the door closed before she got there.

Hanlin said, “It would be embarrassing for her to sit up there and say, I still work for Macy’s. I am not sure that’s the guy or not.

“There is no way she positively identified my client being that person on the video. You have seen the video.

“Is that even a man? There’s a strap. Is the person carrying a purse?”

In rebuttal, Blomer said, “I submit to you to watch the video. From the video you saw the defendant pick up the coats and exit the store.”

Jurors retired to deliberate, and in minutes they asked to see the video.

“We feel that it was too far away,” they told Schwartz.

He prepared to show it at least 10 feet closer to the jury box.

A juror asked if he could extend it to the full screen, and Schwartz said no.

He played it and asked if they wanted him to play it one more time.

A juror said, “Could you play that one more time? Could you pause one part particularly? Freeze frame?”

Jurors resumed deliberation and soon decided for the state.

Three appellate defenders from Chicago appealed, and two appellate prosecutors from Mount Vernon joined Carr on behalf of the state.

The state conceded that Schwartz committed error in voir dire, but argued that the error did not matter because the state won with overwhelming evidence.

Fifth District judges watched the video and called it a close case.

Moore wrote that Schwartz’s error “threatened to tip the scales of justice against the defendant.”

“Overall, the quality of Womick’s testimony was weak,” Moore wrote.

He disagreed with the state’s contention that Womick unequivocally stated that the person she saw take the garments and leave the store was the defendant.

“She was never asked to make such a statement, and she did not,” Moore wrote.

He wrote that Mueller was not arrested at the scene and that when arrested he was not in possession of the proceeds.

“In light of Officer Lomax’s testimony on direct examination, counsel for the defendant astutely declined to cross examine him,” he wrote.

He wrote that the jury was told in opening statements that Lomax would identify Mueller, but he made no such identification.

“Apparently it was the desire of the jury to take the state up on its suggestion to look to the video for a disinterested and unbiased depiction of the defendant’s alleged crime,” Moore wrote.