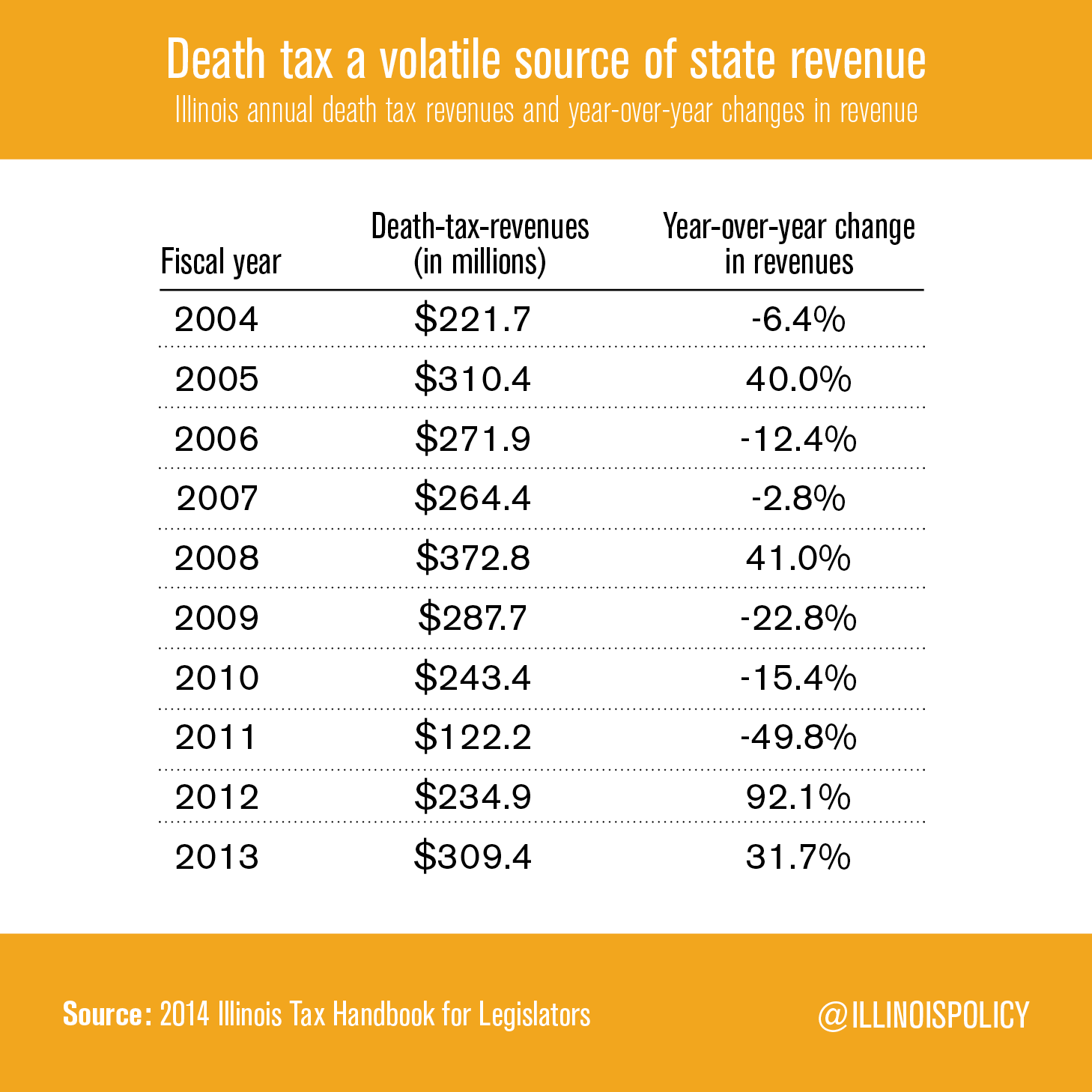 The additional tax revenue Illinois will take in from the Amazon tax should be offset by repealing the state’s most obvious driver of out-migration: the death tax.

Americans consider the death tax to be the single most unfair tax, and nearly 70 percent of Americans polled by the nonpartisan Tax Foundation believe it should be repealed nationally. As the saying goes, “You shouldn’t have to visit the undertaker and the tax man on the same day.”

Not only is the death tax unpopular, but it also is extremely harmful to an economy. The Tax Foundation estimated that the death tax costs the U.S. five times more in GDP than it collects in tax revenue each year. That’s because the death tax shrinks the country’s investment stock, which drives down worker wages and GDP growth. It’s hard to imagine a more callous and harmful way to levy a tax.

At the state level, the effects of the death tax are likely much more harmful to economic growth. A state’s death tax can be easily avoided by moving residency and wealth to a state that doesn’t levy such a tax. Only 18 states impose some form of death tax, with Indiana, Ohio, and North Carolina having repealed theirs in the last few years. Full repeal of Tennessee’s death tax will be complete by 2016, meaning that Kentucky will be the southern-most state to impose the harmful tax.

In addition, Maine has proposed repealing its death tax, while New York, Minnesota and Maryland plan to significantly reduce theirs.

Illinois’ 2014 Tax Handbook for Legislators implicitly admits that the death tax is a driver of out-migration. The handbook says that local Illinois home-rule units could impose inheritance taxes if they choose, but the taxes “might be avoided by moving outside the unit imposing them before death.” The exact same logic holds true at the state level.

Illinois’ death tax is a major driver of wealth from the state. As wealthy Baby Boomers head for retirement, Illinois gives them every reason to move to a state with a warmer climate and no death tax. In fact, an Illinois Policy Institute migration study found that “The most significant driver of out-migration, on a percentage basis, is the estate tax.”

Data from moving companies United Van Lines and Atlas Van Lines, which are primarily movers for businesses, military, and wealthy families, show that Illinois consistently has one of the nation’s highest rates of exporting wealth. Illinois’ out-bound rate hit all-time highs for both companies in 2014.

The Amazon tax is estimated to bring in more than $200 million in additional annual tax revenue to the state, an amount that is likely to grow. This provides a perfect opportunity to repeal Illinois’ death tax to offset the new revenue growth.

Repeal of the death tax would reduce out-migration, enhance economic growth and increase wages. It would also protect entrepreneurs who inherit the family farm or the family business.

The death tax is a mistake that many state legislatures have recently undone or are seeking to repeal. Given the record out-migration Illinois suffered in 2014, policymakers need to pull every policy lever possible to improve economic growth and keep Illinoisans in the state. Repealing the death tax would achieve both.

Michael Lucci is Director of Jobs and Growth for the Illinois Policy Institute.