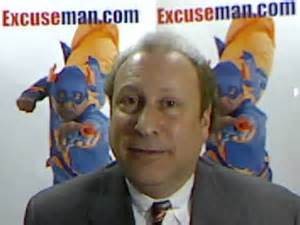 A St. Louis lawyer who entered his appearance in more than 3,000 asbestos cases in Madison County even though he wasn’t licensed to practice in Illinois has been disbarred, marking the first time such disciplinary action has been taken in the state.

Robert S. Sanderson was one of six lawyers — one of whom has appeared in videos featuring himself in a superhero cape as his trademarked alter ego “Excuse Man”– the Illinois Supreme Court disbarred last week. The justices also suspended 14 attorneys, censured two and reprimanded one lawyer during their January term, which comes to an end this week.

Sanderson is the first out-of-state lawyer to face a disciplinary proceeding under an amended rule governing the unauthorized practice of law. He worked for Foley & Mansfield in St. Louis from May 2006 to March 2014 and while he was licensed in Missouri and Indiana, had never been admitted to practice in Illinois, according to documents from the Illinois Attorney Registration and Disciplinary Commission (ARDC).

In May, the ARDC lodged a two-count complaint against Sanderson that alleged he had engaged in the unauthorized practice of law by entering his appearance in 3,081 cases in Madison County and at least six in St. Clair County between April 2007 and March 2014.

He was also accused of misleading his law firm into thinking he was licensed in Illinois, using another lawyer’s registration number without her knowledge and making false statements to and failing to cooperate with the commission during its investigation.

The ARDC brought its complaint under amended Supreme Court Rule 779(a), which allows the commission to seek discipline against out-of-state lawyers who engage in the unauthorized practice of law in Illinois.

“This is the first proceeding that the Court has considered under Supreme Court Rule 779(a) since the rule was amended on December 7, 2011,” the ARDC notes in a motion filed last month with the high court.

The motion, which says Sanderson didn’t answer the complaint or appear at his August hearing, sought the high court’s approval of the ARDC Hearing Board’s October report and recommendation for his disbarment.

According to the Hearing Board report, the ARDC initiated its investigation into Sanderson in late November 2013, when it sent a letter asking him for information about his practice of law in Illinois.

Sanderson, documents show, responded in February with a letter saying he had been admitted pro hace vice in several Illinois cases “and that apparently created the confusion in my office.” He also said a staff member had been preparing pleadings without attorney authorization and was on a leave of absence due to that behavior.

He further told the ARDC he was in the process of applying for admission to Illinois’ bar and that his firm “mistakenly jumped the gun” when it put Illinois on his list of law license registrations on its website.

The ARDC, however, said none of those statements were true and asserts Sanderson “never disclosed to the courts, his clients, opposing counsel or his firm that he was not licensed to practice in Illinois.”

In its report recommending disbarment following a default proceeding, the Hearing Board pointed to Sanderson’s “extensive pattern of misconduct … in more than three thousand cases over a period of about seven years.”

“We have not found any other case in which there were so many acts of misconduct,” the panel said in its report.

James J. Grogan, deputy administrator and chief counsel of the ARDC, said Tuesday that while Sanderson’s matter was a case of first impression in Illinois and marked the first proceedings brought under amended Rule 779, it most likely won’t be the last.

As the globalization of the legal profession continues, Grogan said he expects these types of unauthorized practice of law proceedings will continue not just in Illinois, but around the country and will likely reach lawyers practicing in foreign countries.

The ARDC in its motion to the Supreme Court told the justices that even though Sanderson was never licensed to practice in Illinois, they still have the authority to discipline him under Rule 779, and in conjunction with their inherent and exclusive jurisdiction over the practice of law in the state.

The commission further noted that other jurisdictions, including courts in Delaware, Maryland and Colorado, have disciplined out-of-state lawyers for the unauthorized practice of law in their respective states.

Grogan said one of the questions raised when out-of-state lawyers are disbarred in a state where they have never been licensed is whether they will then face reciprocal discipline in other states, specifically the one or ones they are licensed to practice law in.

In Sanderson’s case, it appears his Missouri license remains active while his Indiana law license was suspended in July, although the reasoning behind the suspension was unknown.

Junkert and Rehberg were disbarred on consent following unrelated criminal matters. In November, published reports show Junkert was sentenced to four years in prison after pleading guilty to conspiring to deliver a controlled substance within 1,000 feet of a school and Rehberg was sentenced to nine years for stealing more than $1 million from clients.

The three other attorneys disbarred by the high court were all accused of misappropriating client or settlement funds, according to the ARDC, which says Evola took more than $900,000, Flynn more than $500,000 and Margolis more than $1.03 million.

The ARDC alleges Margolis misappropriated the million-dollar-plus from settlement funds in 10 separate matters, forged clients’ names in three matters and made misrepresentations to clients about their settlement funds. The former trial lawyer with a Chicago firm bearing his own name was suspended on an interim basis in 2013.

Margolis has since moved to Los Angeles to pursue screenwriting, according to his website that shows he is the author of a couple of novels and comic books. He has also appeared in several comedy videos and as “Excuse Man,” the subject of a few articles.