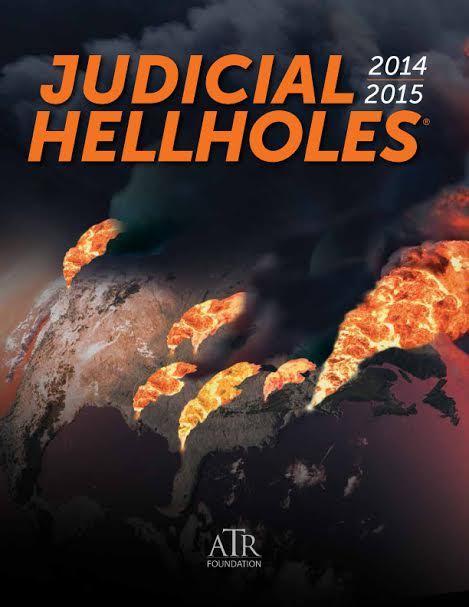 Recent developments in New York City’s asbestos docket have caused it to be declared the No. 1 Judicial Hellhole by a national legal reform group.

On Tuesday, the American Tort Reform Association (ATRA) released its annual report of the jurisdictions it feels apply laws in an unfair and unbalanced manner. In 2013, New York City placed third, but this year the New York City Asbestos Litigation (NYCAL) claimed the top spot.

“No Judicial Hellholes report would be complete without the latest dispiriting news from rural Madison County, Illinois, still home to more asbestos litigation than any other jurisdiction in the country," stated ATRA President Sherman "Tiger" Joyce.

"The overwhelming majority of asbestos claims filed there come from plaintiffs that have no connection to the county, much less the state of Illinois. And most new claims are speculative lung cancer claims."

Travis Akin, executive director of the Illinois Lawsuit Abuse Watch organization, said that Madison County's asbestos docket could be subject to further burden as a result of a law that was pushed through the state legislature at the behest of the Illinois Trial Lawyers Association.

"Now, even more asbestos lawsuits could be filed in Madison County as a result of surprise legislation pushed by the Illinois Trial Lawyers Association in the 11th hour of the recently concluded fall veto session of the Illinois General Assembly," Akin said. "The legislation (SB 2221) eliminates the state's 10-year statute of repose on the exposure to asbestos on building sites during construction projects, which means lawsuits arising from asbestos exposure at construction sites will have no time restrictions."

"Illinois courts are fair and they provide an avenue for victims of wrongdoing to hold perpetrators accountable," Cooney stated. "Our legal system serves as a powerful deterrent against corporate misconduct, and that’s precisely why ATRA is so determined to shut down the ability of individuals to seek justice from the courts. ATRA’s funders do not truly fear frivolous lawsuits; they know our justice system screens out the very few suits that are without merit long before they get to trial."

As for the New York City ranking, the report states that its asbestos docket "has been transformed from a challenging jurisdiction for defendants to a patently unfair one," citing four verdicts in the past year ranging between $7 million and $25 million.

“Recent decisions by the court may cause these verdict levels to climb even higher in 2015.”

In April, Judge Sherry Heitler entered an order that allows punitive damages in NYCAL cases for the first time since 1996. Defendants have requested a stay of the order in order to reargue the issue.

The motion preceding Heitler’s order was filed by prominent plaintiffs firm Weitz & Luxenberg. It argued that prohibiting plaintiffs from seeking punitive damages was unethical, unconstitutional and preventing defendants from engaging in settlement discussions.

“Judge Heitler’s decision to reintroduce punitive damages has significant consequences for defendants and insurers in NYCAL cases,” the report says.

Defendants are arguing that Heitler’s decision has created “chaos and confusion.”

Plaintiffs attorneys, though, claim Heitler’s order simply overturned a deferral that was never intended to be permanent.

“Tort plaintiffs, including those in New York, have long possessed a well-settled right to the punitive damages cause of action,” Alani Golanski of Weitz & Luxenberg wrote.

ATRA also takes issue with the process of consolidating asbestos claims for trial. NYCAL’s “highly permissive approach” to consolidation is in contrast with other courts, the report says.

“Troubling developments in NYCAL in 2014 have served to make an already plaintiff-friendly court inarguably so,” ATRA President Tiger Joyce said.

ATRA's other gripes with NYCAL are:

-Holding that an equipment manufacturer has a legal duty to warn for every asbestos-containing product that could have had a foreseeable use with the equipment it makes;

-Exploitation of a deep pocket liability imposed on minimally at-fault defendants that are found to have acted with reckless disregard for the safety of others;

-The business practices of plaintiffs attorneys; and

-A decision by Heitler that requires a defendant to establish its non-liability in cases brought by plaintiffs who do not know for certain if they worked with the defendant’s product.

The first is the long-running case against the former manufacturers of lead paint that resulted in a $1.15 billion verdict that has been appealed.

The other is a new case brought by the counties of Santa Clara and Orange against the makers of prescription painkillers. In both cases, private firms have been hired on contingency fees and are pursuing public nuisance claims.

“In those situations, oftentimes there is no one else who can do it. Local government entities fill an important role in that… and also, it’s part of their duty to act on behalf of their citizens and to identify issues that are facing them.”

The annual report had previously included all of West Virginia as a Hellhole, but only the state Supreme Court is mentioned this year for a series of pro-plaintiffs rulings that ATRA disagrees with.

Tops on the list was a late 2013 ruling in a case that changed premises liability law, abolishing the open and obvious danger doctrine.

ATRA has a similar disapproval of decisions made by the Florida Supreme Court. One such decision struck down a cap on non-economic damages in medical liability cases.

The court did so by declaring that the legislation could not have been intended to help with a malpractice insurance crisis in the state because no such crisis existed.

“The Florida Supreme Court’s McCall decision provides a law casebook example of the judiciary stepping outside of its role as an arbiter of individual disputes and intruding into the policymaking role of the legislative and executive branches of government,” the report says.

In addition to the court's asbestos docket, the report also noted a class action lawsuit against Philip Morris over its light cigarettes that once resulted in a $10.1 billion verdict.

Over the years, appeals have kept the case alive. In April, the Fifth District reinstated the verdict, which has now been appealed to the state Supreme Court.

Plaintiffs attorneys also fueled an effort against Justice Lloyd Karmeier in his retention election in November. Karmeier was in the majority in 2005 when the court ruled against the plaintiffs in the tobacco case, Price v. Philip Morris.

Missouri’s high court struck down a limit on punitive damages in September, while in the process permitting an excessive award, ATRA says. The punitive damages award was $1 million, while the actual damages were $25,000.

ATRA is also critical of the state’s plan for appointing judges, in which a seven-member commission appoint appellate judges. ATRA is upset that two of the three lawyer spots on the commission are taken by personal injury lawyers.

Louisiana dropped from the No. 2 spot to No. 7, but ATRA says there are still problems, including federal and state litigation that targets energy producers like BP.

It calls the litigation that followed the 2010 Deepwater Horizon oil spill a “shameless feeding frenzy.”

The rest of the report

Hodges found that plaintiffs attorneys had manipulated their clients’ exposure evidence through the years in order to maximize recovery against Garlock.

Legal Newsline, an associate publication of the Madison-St. Clair Record, won a court battle to have the evidence submitted by Garlock unsealed. The evidence has not been unsealed yet.