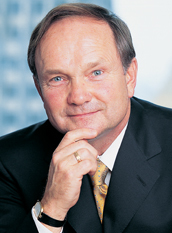 Illinois Supreme Court Justice Lloyd Karmeier must submit to a subpoena in a $7 billion racketeering suit against State Farm because he associated with the alleged racketeers, according to Chicago lawyer Robert Clifford.

“The amount in controversy is staggering,” Clifford wrote on May 8, in a motion to compel Karmeier’s production of documents about his election in 2004.

“The information sought is essential to proving the parties’ association," Clifford wrote.

He seeks 64 kinds of records, including Karmeier’s tax returns from 2002 to 2007, and all his communications with 87 other persons and entities including the Record.

“The issues in this action, including the independence of the judicial system, could not be more important," he wrote.

He wrote that the racketeering statute makes it unlawful for any person associated with any enterprise to participate, directly or indirectly, in affairs of the enterprise.

The words, “associated in any enterprise,” appear in italics.

On the same date, Karmeier moved to quash the subpoena or adopt a protective order keeping the documents confidential.

His lawyer, Anthony Martin of St. Louis, also sought a protective order for a deposition of Karmeier that lawyers for three plaintiffs plan to conduct.

Martin filed no brief with his motion, asking instead to exceed a 20 page limit.

Magistrate Judge Stephen Williams granted him 15 extra pages on May 12, and set a May 15 deadline for the brief.

Lawyers for individual defendants Ed Murnane and William Shepherd can join too.

Clifford raised the dispute in his motion, proposing an alternative order that would require Karmeier’s counsel to meet with plaintiff lawyers privately.

"In light of the impasse of the parties, plaintiffs ask this court to either command Justice Karmeier to produce the requested documents, or at the very least, to confer with plaintiffs’ counsel privately, without other defense counsel participating in the conference,” Clifford wrote.

Martin responded in his motion, quoting a procedural rule that such conferences should include other affected parties.

Williams cited the rule, plus two others, in opening the conferences.

“This will also foster more productive meet and confers that do not need to be interrupted by consultation with interested parties that have been excluded from the conversation.”

The list of documents that Clifford wants Karmeier to produce begins with those relating to his selection as a candidate.

Next it seeks documents from 2003 and 2004, between Karmeier and the Illinois Civil Justice League, Shepherd, Murnane, State Sen. Dave Luechtefeld and Dwight Kay, the Illinois Republican Party, the U.S. Chamber of Commerce and its Institute for Legal Reform, the Illinois Coalition for Jobs, Growth and Prosperity, State Farm chief Ed Rust, and nine other persons.

-Karmeier’s communications with State Farm since 2002;

-Communications with Martin’s firm, Sandberg Phoenix, about the State Farm case, from 2003 to 2005;

-Evidence of any agreement between Karmeier and other defendants for joint defense or cost sharing;

-Notes, letters, and articles he wrote about the case since 2003;

-Documents relating to Murnane’s relationship to the campaign;

-Rosters of personnel information in the campaign and their job descriptions;

-Voice messages and phone use records;

-Names and passwords for news groups and chat groups;

-"Documents which in any way evidence your knowledge of who made any contribution (as defined) to your campaign in 2003-04 for the Fifth District seat on the Illinois Supreme Court for the election held in November 2004;"

-Karmeier’s personal calendars for 2003-04, “no matter what form they were kept or maintained;"

-Any article, interview, or communication by him in his campaign;

-Any article, interview, or public statement by him, apparently at any time;

-The identity of the campaign bookkeeper;

-Documents referencing any meeting of campaign employees or officers; and

-Personal calendars of everyone in the campaign.